From Desktop to Mountaintop

How did I climb a mountain?

I started with not being attached to reaching the summit.  As in, it was my goal to reach it, but my life would be OK if I didn’t make it.

I’ve never identified as “athletic.” But I knew that if I was going to participate in the Sacred Scotland Tour, I would need to be in better shape than the version of me who huffed and puffed her way through Costa Rica just a few months before. When you travel with my tribe, there is no double decker tour bus or amphibious duck boat. We go to spots off the beaten path, where sacred ruins greet only those who have the will and stamina to make it up or down the hills, mountains and streams to get there.

I had to be prepared for at least five days of 10K hikes, so I hired Liz McHutcheon of Running On Venti to help me train.

It was the best decision I could have made.

She gave me the framework to create the stamina and strength required to reach all of the remote sacred spaces we would visit throughout the Scottish Highlands.

One of these places was Mount Schiehallion, also called “The Fairy Hill of the Caledonians.” (Trust me, it’s definitely more mountain than hill.)

We were originally scheduled to climb it on the third day of the tour, but the moody Scottish weather pushed back our climb to day seven, with us waking up every day thinking it would be THE DAY.

It actually worked out perfectly, because I needed those other days to get used to the terrain. Mossy bogs, gravely paths and slippery rocks were not something my Planet Fitness treadmill prepared me for.

So on the morning of the hike, we started our climb all together on a gentle slope not far from this spot. 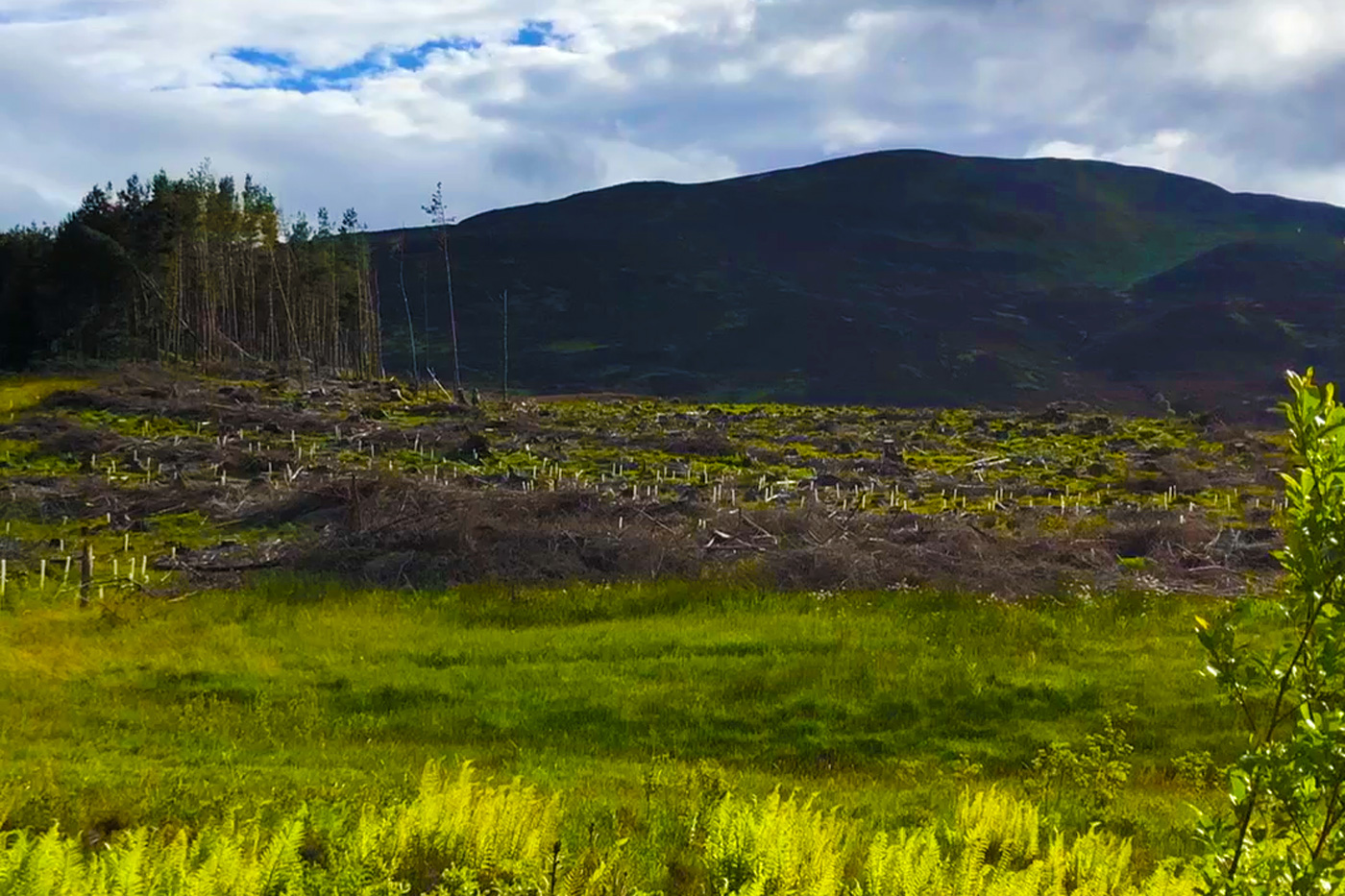 I had developed symptoms of plantar fascitis two weeks before the trip, and I’d asked Liz M. what I should do if I needed to stop and stretch my calves or massage the bottoms of my feet. I was worried that the group would have to move on without me.

“The hike does not exist yet,” she said. “Stay present.”

I was soon very present with the fact that the others were making their way up the mountain more quickly than I was. I tried to keep up, but I had to take frequent breaks to keep going.

Our driver had gone back to the van early on to check if it was locked (it wasn’t). So I knew, even when I ushered on the last person in the group who’d stayed to chat with me, I would not be the very last. That thought comforted me through several solitary breaks.

As I was resting on one particularly powerful quartz boulder during one of these breaks, I looked out at the gorgeous view and felt tears begin to well up.

I clearly underestimated this hike.

What was I thinking?

I was overwhelmed with feelings of being “not enough.” At that point it wasn’t even about getting up the mountain, it was about avoiding getting left behind.

But I had been left behind. Except for the driver. He may have even decided to stay in the van.

But in this solitude I managed to shift my focus from what I appeared NOT to have – the energy to move forward – to what I DID have, which was this absolutely stunning view. 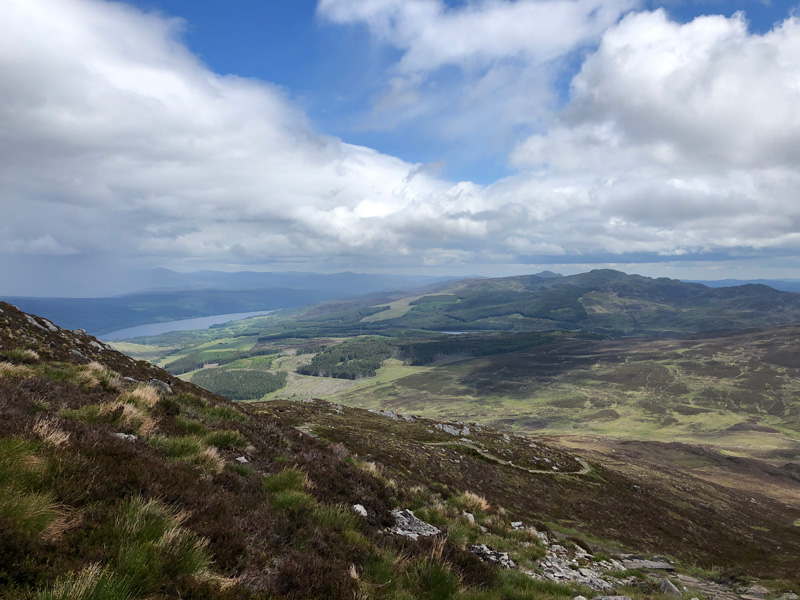 And it occurred to me that while my body needed to take so many breaks to recharge, my soul needed these breaks to pause and drink in views like this and appreciate how far I’ve come.

I realized that all my life, I have rarely taken the time to do this – stop, take in the view, and appreciate how far I’ve come.

Until that point, I always pushed forward, never being satisfied, yet never really reaching any type of “summit,” continuing to be incomplete, unsatisfied, and therefore “not enough.”

I don’t want to continue to live this way.

So I took a moment to practice the Hawaiian Forgiveness Prayer, Ho’opponopono. (Thank you, Jenn Wood, for this reminder.)

I basically told myself I was sorry for taking so long to figure out how to “enjoy the view.” And I decided that this hike would be more about the view than the achievement of making it to the top.

Right as I made this shift I saw Mark, the driver, making his way up the path. I was glad to have some company for the next part of the climb.

So we continued upward together and took several more breaks until we reached a cairn (pile of stones) at the end of the grassy path. I was thrilled because I remember our tour leader, Ryan, telling us that once we reached that cairn, some people may choose to stay there and others may choose to continue up to the summit.

I don’t know how I translated this into “If you reach the cairn, you’re almost there,” but I did.

I felt pretty good and ready to go “the last bit to the top.” 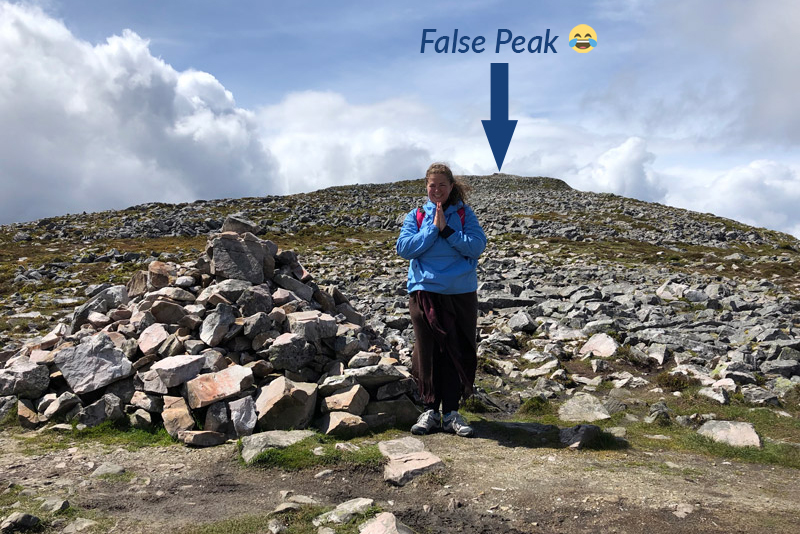 Mark and I started our ascent through the boulder field. There was no path, only rare patches of grass, some more worn than others.

This was a whole new phase of my climb. What had been a fairly straightforward goal of having enough energy to make it up the mountain became a matter of having enough strength, balance and agility to make it safely through the boulder field through bouts of rain and wind.

One bad step and I could slip or stumble on a wobbly rock. My eyes were fixed on my feet, making sure every single step was solid. I found myself squatting down to lower my center of gravity so I could make my way over and between boulders with more stability. (Thank you, Liz McHutcheon, for all the lunges and squats you built into my training!!)

And then I had to somehow stay on track, on a path that did not exist. I had to pause often to look up and make sure I was still moving toward the summit and not veering off to the side toward a dangerous and steep section of the mountain.

Mark and I kept the same pace across several “false peaks” until I looked up and saw yet another one. The rocks in front of me were jagged, wet and endless.

I was just done.

Mark kept on, nimbly climbing up the serrated ridge of boulders. I did not even attempt to ask him to wait for me. He looked like he really needed to press on and I respected that.

I looked down at a patch of grass and half decided I would just stay there until people from our group started making their way down–that is, if they even came down this way.

I sat on a rock, took off my shoes and socks and rubbed my feet. I wasn’t upset. I had long since released the attachment to reaching the summit. I was something else… I couldn’t quite pinpoint it…

I knew if I stayed here and waited, I would be bored. This the same way I felt in Costa Rica at the thought of not joining my group for a second night of Ayahuasca ceremony. I feared the experience would be too much for me to handle, but if I stayed behind, I would be bored. Such a simple emotion, but for me, a powerful motivator to continue on.

So after refueling and adjusting all my layers, I revisited the decision of how to make my way up those boulders safely.

Going straight up was too dangerous. So I did something Ryan had recommended… I asked the mountain to help me choose the right path.

I got an intuitive hit that I should go to the right and then go up from there. Sure enough, there were fewer boulders and a bit more grass, and I was able to continue my climb. I was alone, but I liked it that way. I needed to be able to focus 100% on each step.

I don’t know if anyone else does this, but I found myself creating mantras with my steps. Saying a solid “YES” as I placed my foot on each stone. Creating sentences with one word/syllable for each stone.

And in doing this, I remembered who I am.

A woman passed me on her descent from the summit. I had not dared ask any other hikers how far it was to the top–I was afraid that I would just be discouraged. But I guess she saw that I needed this information before I even knew I did.

My brain simply did not do the meters to feet conversion. 500 meters sounded great. I went with it.

And shortly after that, I began to see a few members of my group heading toward me with huge smiles.

I guess because I fell behind so early in the hike, they thought I was not going to make it to the top.

I’d had the energy, stamina, strength, and mindset to make it this far. What I needed now was surrender.

I surrendered to the fact that I needed help to make it to the summit. 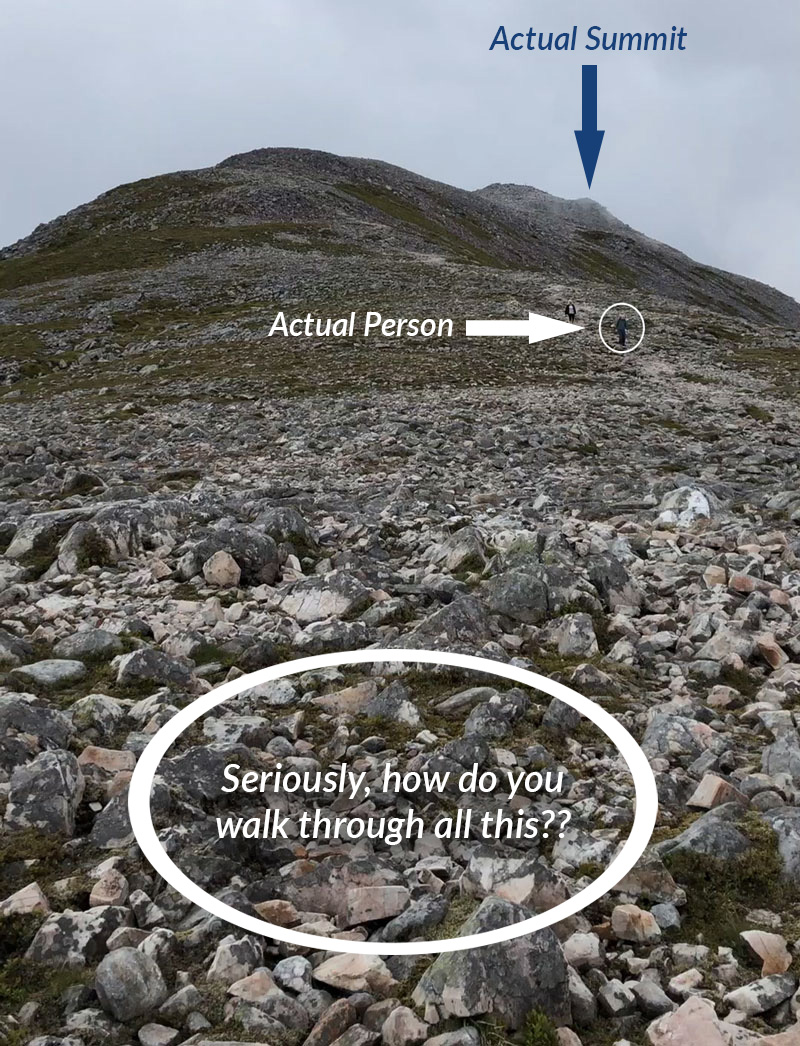 Rory, a former rugby player-turned shaman, had helped me not slip and fall on the more treacherous parts of our other hikes, so when I saw him descending, I told him, “I was hoping that you might help me down this mountain.” It was always easier for me to climb up than to climb down. “Sure!” he said without hesitation.

I expected that he would simply wait for me to make my way back to that spot, but he actually went back to the summit with me, along with Lucas, another amazing young man who’d also helped me stay sure-footed on other hikes.

So all three of us locked arms, “off-to-see-the-wizard” style, and FLOATED up to the summit.

Through rain and wind, we made it.

Poetically, once we reached the summit, the clouds cleared and we could see THIS. 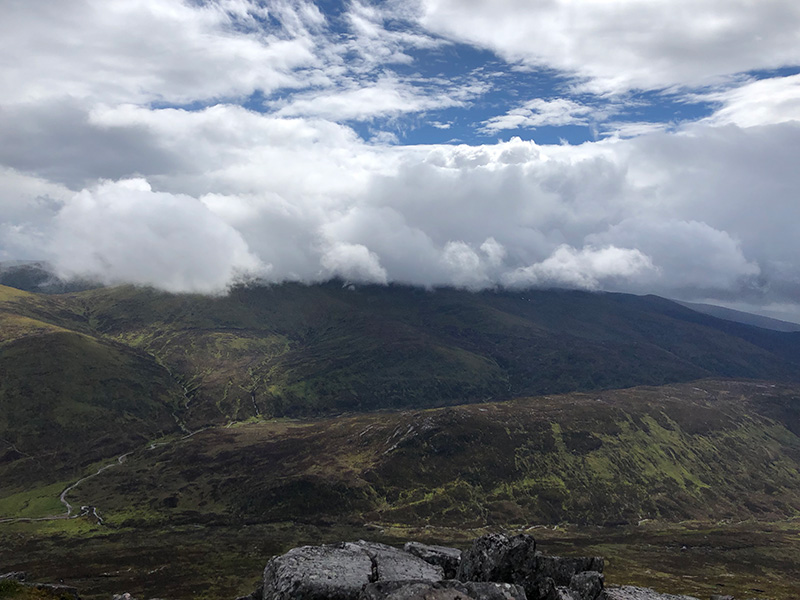 The only thing Rory and Lucas didn’t do is let me know I had protein bar in my teeth before I made this video, but I’ll let that slide. 😂

On our descent, we saw this rainbow and some more gorgeous views! 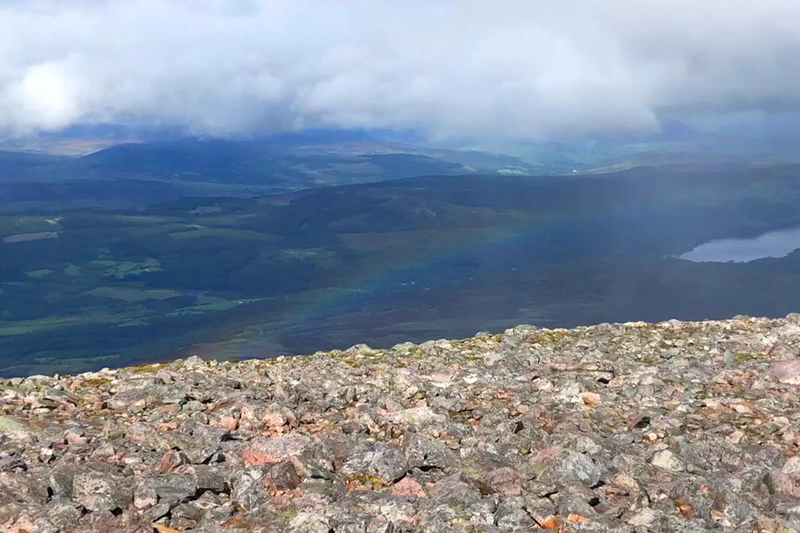 And I’m not gonna lie… the trip down the mountain was almost as hard, physically, as the climb. It was rough on my hips and knees, and I did need to take breaks to rub my feet and do some stretching.

But the views certainly helped! 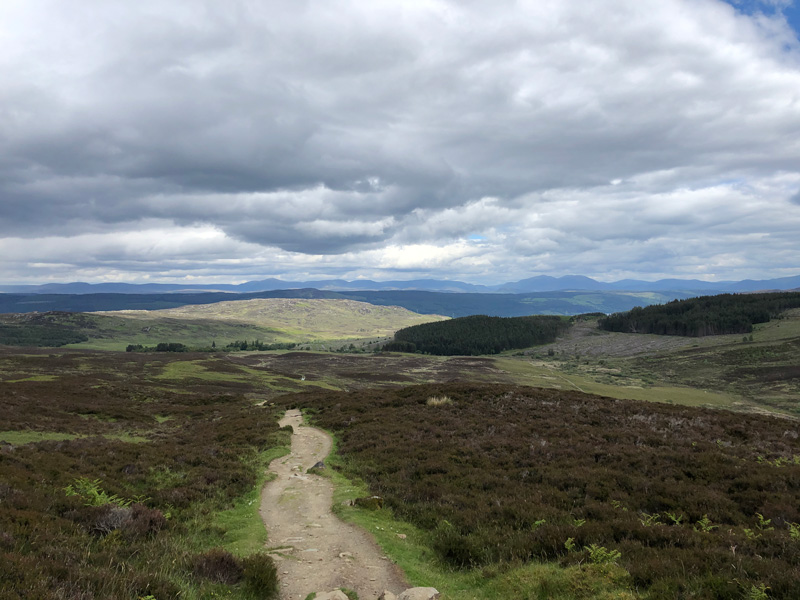 But most importantly, I learned to honor my own pace, my own process, and stop every now and then to celebrate my progress.